People love being social. Innately human beings like to share, collaborate and connect. This has become more so visible during this pandemic. With travel restrictions and people being encouraged to work from home. The need to be together was never felt more important. Hence, every day new and more improved versions of communication are being developed.

Video calling apps has seen a tremendous rise in their fortunes and more so in this pandemic. Zoom calls, Google Meet are few such services increasing their reach many folds day by day. Moreover, Google PlayStore is filled with numerous video calling apps like IMO, Google duo, Whatsapp, etc. Thereby making it more accessible.  Tech giants are working tirelessly to provide a better and more immersive experience of communication. In order to do that companies are turning towards AR, VR, MR and other technologies.

All these are setting a platform for 3D calling and more. Yes, you heard it correctly “3D video calling”.Google is working on a technology where it would be possible for such communication. Instead of the 2D video calls that we are using today, we would be talking to each other in the life-size 3D images. This is the premise of Google’s Starline Project.

Recently, Google gave the first glimpse of the “Google Starline Project” at the annual developer conference. It relies on custom-built hardware and highly specialised equipment. It is currently available in only a few of the Google offices.

In a blog posted by google about Project Starline, Google has concealed far more information than it has revealed. It has only revealed that Project Starline “combines the advances in both hardware and software” to enable friends, families and loved ones to feel together.  Hence even if you are thousands of miles apart yet you may feel like having a conversation in close proximity. 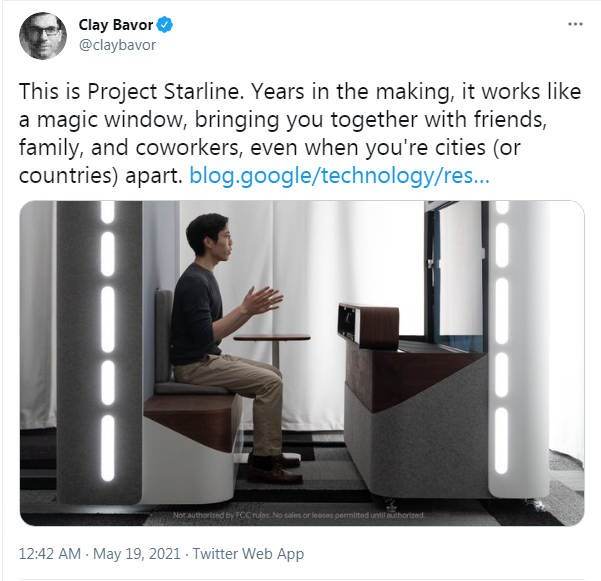 How does the Google Starline Project work?

To make something revolutionary like this work requires an amalgamation of various technology. Google is using multiple technologies like research in computer vision, machine learning, spatial audio and real-time compression etc., to make these realistic 3D holograms possible. It has also developed a most advanced light field display system that creates a sense of volume and depth which can be experienced without the need for additional headsets or glasses.

So Project Starline uses the need for any extra AR or VR headsets. This system relies on a 3D image of the user, which is then compressed in real-time and then sent to a 3D display to give the effect. It seems as if the person is really sitting opposite you.

Since it requires a specialized set of equipment our smartphone and laptop displays won’t support this kind of 3D effect. But surely in future after more advancement, it may become a reality. As of now we just have a glimpse of this project. Google has been working on this project for more than 5 years now. They are using high-tech ‘video booths’ where these 3D holographic calls are possible, and as expected they are packed with sensors and cameras.

Whatever we know about the Google Starline project is based on various reports. Google has not disclosed even the information like the cost to build one of the specialised booths, and more. From the reports, we could gather that Google is using WebRTC, the same open-source infrastructure that powers Google Meet. It is also not clear what kind of internet speeds such a system would require in order to work without any glitches given that it will transmit 3D holographic images, which will likely be very heavy.

About other similar technologies in this space

Though there are many companies working in this space only a few have yielded tangible results. Let’s get to know about two of the successful ones.

JIO Glass, a mixed reality headset – This headset essentially pairs with your phone to perform various functions like conducting classes, making video calls and hosting meetings in a 3D holographic environment. Tesseract, a subsidiary of JIO platforms, has designed it. JIO glass is presently compatible with 25 mixed reality apps. This headset has an ergonomic design for comfortable use and a camera that is upfront. It uses multiple built-in sensors to allow users to engage in immersive content.

Microsoft HoloLens– Hololens came into being under Project Baraboo. It is a pair of mixed reality smart glass that is developed and manufactured by Microsoft. It is one of the first head-mounted displays running the Windows Mixed Reality platform. Moreover, it ran under the Windows 10 computer operating system. The Hololens is Microsoft’s take on AR (augmented reality), which is termed as “Mixed Reality” (MR). Hololens uses multiple sensors, advanced optics, and holographic processing that gels effortlessly with its environment. These holograms can be used to display information, blend with the real world, or even simulate a virtual world.

What are the benefits of these Technologies?

These projects as such may have restricted use but the technologies used in them is what is going to shape our future. Projects like these provide a major boost to AR, VR, MR technologies. With time these technologies will be refined further to enhance their usage and their application in different fields. The penetration of mobile phones is a testament to the refinement of technology. It originated in bulky form with keypads and only had it. But with the further enhancement of the technology it has become thin, lightweight, touch-sensitive etc., and that too at cheaper prices. Similarly, this field will gain momentum and may reach every individual soon.

Lets know more about these technologies:

The will to capture Virtual reality is not a trend of the present. Humans have been working to find more effective ways to interact with the environment. The idea originates in the 1930s when science fiction writers, inventors, dreamt of an environment where one could escape from reality through Art and machines.

So we were finding the answer to questions about Virtual Reality vs. Augmented Reality vs. Mixed Reality long before we had the technology. It is not science fiction anymore as with modern technology all this is possible now. Experts predict rapid growth in VR industry.

VR is the most widely known of these technologies. It is fully immersive, thereby tricking your senses into thinking you’re in a different environment. Using a head-mounted display or headset, you’ll experience a computer-generated world of imagery and sounds in which you can manipulate objects and move around using haptic controllers while tethered to a console or PC.

AR overlays digital information to the real-world environment. Pokémon GO game which became an international sensation is one the best-known examples. Augmented reality keeps the real-world central but enhances it with other digitally created details. Therefore it supplements your real environment with a layers new layer of perception.

MR brings the real-world environment and digitally created elements together. In mixed reality, you interact with and manipulate both physical and virtual items and environments. It uses next-generation sensing and imaging technologies. Mixed Reality allows you to see and immerse yourself in the world around you even as you interact with a virtual environment using your own hands. It breaks down the wall of reality and imagination thereby, offering an experience that can change the way you game and work today.

The uses for Virtual Reality, Augmented Reality, and Mixed Reality is endless. Virtual Reality Technologies is an all-encompassing term. Its application is in every field like gaming, movie making, communication etc. It can be used in the following industries;

Google, in its blog, has mentioned that they are using “custom-built hardware and highly specialised equipment. for this project”. It states that “Our goal is to make this technology more affordable and accessible, including bringing some of these technological advancements into our suite of communication products.” The technology used in Starline also has others application. Some of the optics developed for Starline could be deployed sooner in everyday tech. The illusory parts that are the lighting and shading or the spatial audio are of huge applications. If used in current video calling services it will enhance our communication experience

Till the fine-tuning of the equipment and technology, Project Starline booths will be used primarily in Google offices. Google will soon run trials of the technology with a handful of early customers. Customers include enterprise cloud businesses, Tele – Medicine apps, or Media companies etc

New Virtual reality technologies and products continue to fill up the market. They are making new and more immersive environments accessible to the masses. These technologies are becoming cheaper and more widespread. We can expect to see many more innovative uses for both technologies in the future and perhaps a drastic change in the way we live and communicate. Possibilities are endless!

Idea Schedule is an online blogging site where dynamic writers showcase their knowledge by bringing in innovative and unique blogs on various trending topics. We love to surf the Internet and always try to get new Ideas about new Technology and Innovations and share this great information with all the technology lovers.

Important Reasons why Nonprofits Should use SharePoint

Cloud Migration: Why is it mandatory in the...

How to Make Animated Videos That Promotes Corporate...

3 Simple Ways to Increase Engagement for Your...

Why iPhone 11 Screen Gets Broken So Easily?

@2021 - All Right Reserved. Designed and Developed by Codeglean softwares